We use cookies to give you a better service. Continue browsing if you're happy with this, or find out more about cookies.
Free UK Delivery on orders over £40
Leading UK First Aid Manufacturer
Over 4000 products available in stock

What is an electric shock?

An electric shock can be caused by a voltage as low as 50 volts, which can block electrical signals between the brain and muscles. This can cause the heart to stop beating effectively, breathing problems and muscle spasms, all of which pose a serious threat to a person’s life.

Are electric shocks at work rare?

Each year, around 1000 workplace accidents involving electrical shocks or burns are reported to the HSE, including about 30 fatal accidents. Voltages as low as 50 Volts AC or 120 Volts DC are hazardous. Even non-fatal shocks can cause severe and permanent injury.

What injuries do electric shocks cause?

If, as mentioned above, the heart stops beating effectively or a person experiences breathing problems, this can result in cardiac arrest and even death.

Loss of muscle control can cause very painful muscle spasms that can even be strong enough to break bones. They also can cause more harm as they cause a person to have less control: they might not be able to let go or get away from the source of the electric shock or, if working in a dangerous environment, could be in more danger of harm (such as increased likelihood of falling if working at height).

How can workplaces prepare effectively for electric shocks?

There are several supplies employers can utilise to ensure that effective first aid is given in the event of an electric shock. With electric shocks, providing clear information to responders (in the form of an instructional poster, for example) can help to ensure that no further electrical harm is caused, either to the casualty or the responder: 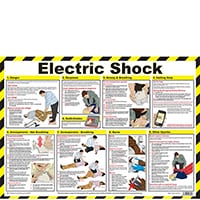 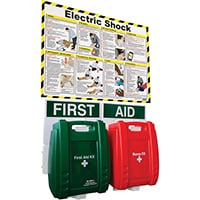 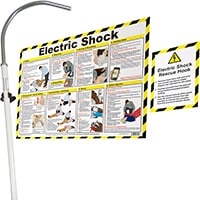 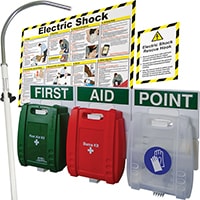 What to do if someone gets electrocuted

Danger: if someone has suffered an electric shock, it is possible that the environment is still unsafe. Make sure you don’t put yourself in danger, and try to remove the danger from the environment:

Response: once the environment is safe, check the casualty’s responsiveness. Speak to them in both ears, using their name and asking them to open their eyes or respond if they can hear you. You can shake their shoulders to get a response, but you should make sure you do not move the casualty.

CPR: if the casualty is unresponsive and not breathing normally, commence CPR and continue until: 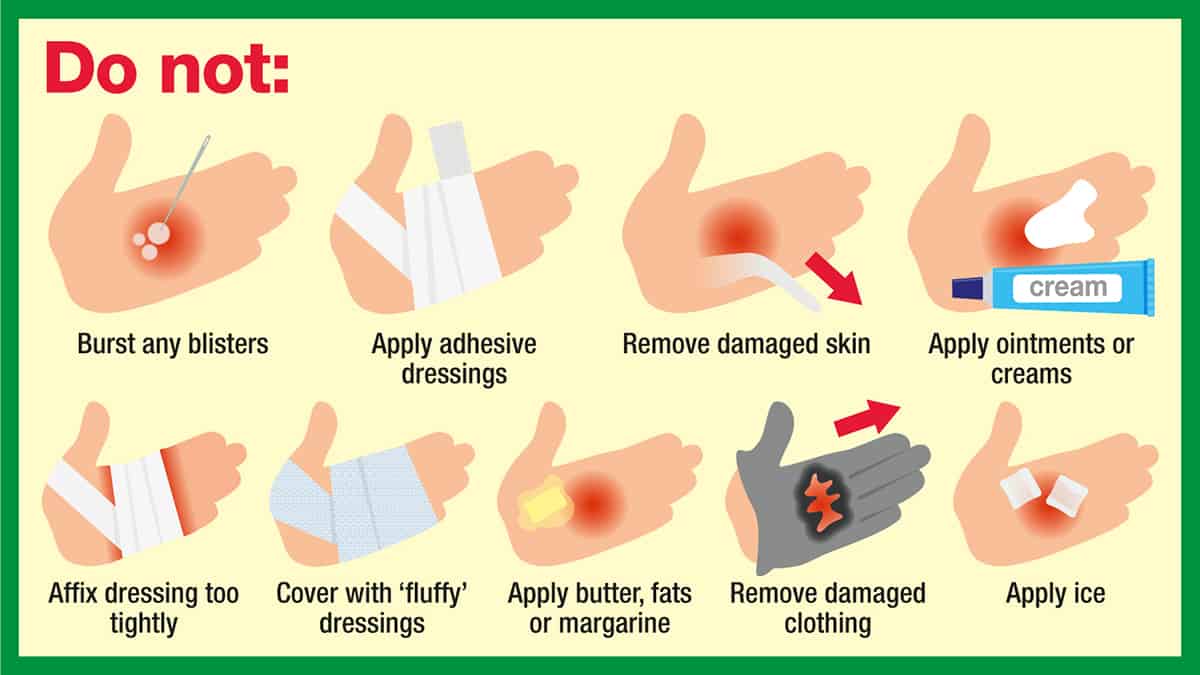 Seizures: it is possible for seizures to be present for some time after the exposure to electricity and they could indicate a seriously ill casualty. In the event of a seizure:

After the seizure has subsided, return to checking responsiveness, airways and breathing, and follow the instructions above.

Even if a casualty appears well and has no injuries after an electric shock, it is still advisable to take them to a hospital or medical facility for a check-up. Electric shocks can cause injury to internal organs or systems that may be affected several hours later.

Preventing electric injury in the workplace

As with all risks, an assessment of the environment is fundamental to understanding the level of risk involved. Employers should consult HSE guidance to ensure they are managing electrical risks effectively.

Even in lower risk environments, electrical safety needs to be taken seriously. With most modern workplaces requiring electrical equipment of some sort – an office computer or even a break-room kettle – electric injury is a possibility that all employers must consider as part of their risk assessment.

Electrical safety when working from home:

Even if employees are working from home, their employer is responsible for ensuring they can carry out their work safely.

Employers should ask workers to visually check for any damage to sockets, plugs or leads used in connection with their work, as well as giving them advice on the hazards of overloaded extension cables.

You are only responsible for electrical equipment you have provided to your workers, but you should make sure it is being used in a safe environment.

The HSE identify three environments in which the risk of electric shock is much greater:

Reducing the risk of electric shock:

Preventing electric injury in the home

Most people know the appropriate safety measures to take around electrical items in the home to keep things safe. However, it is easy for us to slip into careless habits in the face of busy lives and households. Here are some of the key areas to consider:

Make sure you have the necessary first aid kits and equipment to provide effective first aid in your workplace and home.